It’s Friday Fictioneers time. Thanks to Rochelle for providing a weekly picture prompt and hosting the show.This week in response to the prompt I’ve come up with two stories, and I’ve decided to post them both. If you’re wondering how the first one links to the picture, consider its title, then reverse it. 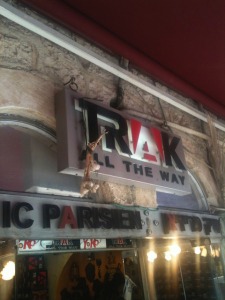 Walter was bookish. At his old school he’d fitted in; now, he was just the nerdy new kid.

‘They race go-karts,’ he complained. ‘They’ll never like me.’

Dad had stepped up, and together they built a kart. It was magnificent.

‘You’ll slaughter them in this, Walt,’ Dad beamed.

Next race day he took position, engine revving. Ben, the current champion, nodded towards him. Uncertainly, Walter acknowledged. At the signal the karts shot forward. Walt took off.

When he came to he wondered how he’d crashed, backwards, into the wall. Then he spotted Ben’s followers nearby, doubled over, laughing hysterically.

After watching this video, I’m surprised anyone wants to venture onto a go-kart race track. It’s hair raising.

‘Louise, this is madness. It’s suicide,’ Joe warned. But Louise was tired of playing safe. The darkness was out there. She had to confront it.

She started out at midnight, in a derelict graveyard, stumbling ahead through deepest gloom, some garlic and a wooden stake at the ready. What would happen? Would there be a low moan, somewhere near? A darting shadow? Could she do this?

Morning revealed the carnage: Louise was stretched on the floor among crumpled pages.

Joe would smile as he read her email:  ‘You’re right. I can’t do it. I’m starting another romance novel. Outline’s attached.’

Where on earth do some superstitions come from? Here’s one interesting piece about possible origins of various monsters of the night.

And here’s another about garlic folklore.

37 thoughts on “Two stories: Kart and Dark Side”